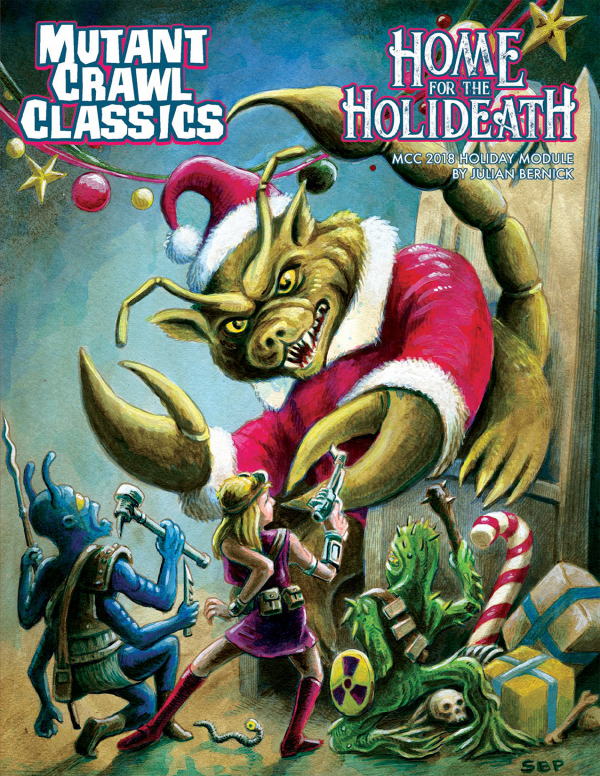 I started things off by showing a fan-made anime video for Weird Al Yankovic's Christmas At Ground Zero to get them in the mood and then started it off at level 1 with Home For The Holideath, which I will go over in my next post.
Posted by Jonathan at 1/16/2019 02:43:00 PM No comments:
Email ThisBlogThis!Share to TwitterShare to FacebookShare to Pinterest

The Gongfarmer's Almanac is a collection of fan-submitted goodies for Dungeon Crawl Classics (and Mutant Crawl Classics). It is released in PDF for free and you can now get the consolidated PDFs in print at Lulu. It's 428 pages and the paperback is priced at-cost at $9.81

My first product is up on RPG Now!

It is "pay what you want" and is a list of 600 place names taken from the Bible that you can use in any RPG setting, especially ancient historical or sword & sorcery campaigns.

600 Ancient Hebrew Place Names
Posted by Jonathan at 9/10/2018 08:41:00 AM No comments:
Email ThisBlogThis!Share to TwitterShare to FacebookShare to Pinterest

Over at rpggeek.com I am reading through the new Mutant Crawl Classics RPG by posting a bit about each section and then saying what I think about it and inviting others to do the same.

Please take a look at https://rpggeek.com/thread/1994342/lets-read-mutant-crawl-classics and let me know what you think!
Posted by Jonathan at 5/17/2018 11:06:00 AM No comments:
Email ThisBlogThis!Share to TwitterShare to FacebookShare to Pinterest

Pulling Adventure Ideas from Western Novels - Heller with a Gun

The 3rd Louis L'amour Western novel in my pile is Heller with a Gun. The hero is a super fast gunfighter, the title's heller with a gun. He encounters an acting troupe making their way west and they've hired a guide to take them through the snow-covered mountains. The hero falls for one of the actresses and realizes the guide is a crook after the actors' money. So he follows them but before he can rescue the acting troupe, the hero is ambushed!

The woman lock themselves in a wagon and have a gun to protect themselves. The sole man of the acting troupe gets away and finds the hero and they hole up in a cabin while the hero heals from his wounds. Then begins a game of cat and mouse with the bad guys trying to find the escaped actor and the actor getting advice from the hero and trying to free the women. Then a third faction arrives - hostile Indians! First the Indians try to steal the hero's horse. The hero has healed enough to shoot one and drive the rest away. Then the Indians attack the wagons, killing some bad guys and getting the locked wagon door open. The hero arrives just in time again!

Then the cat & mouse game starts again. The surviving bad guys are after the good guys and the Indians may be after them both! The good guys are trying to make it to town and near the end, they stay at another cabin for the night. There, they are attacked by the bad guys who capture the male actor and the female actor who the hero has fallen for. Luckily, the hero is a heller with a gun!

The great thing about this book are the different factions interacting, the hiding and finding, and the action scene at the end where the bad guys have the place surrounded. A very nice adventure or even a random encounter for sandbox play!
Posted by Jonathan at 2/23/2018 11:12:00 AM No comments:
Email ThisBlogThis!Share to TwitterShare to FacebookShare to Pinterest

I recently finished the 2nd Louis L'amour Western novel in my pile. This one is Hondo, which was his first novel published in the USA. It's a pretty simple story with the hero encountering a woman and her 6-year-old boy living alone in Apache territory. It seems her husband abandoned them but she doesn't worry about the Apaches. They've always had good relations. Our hero, Hondo, is skeptical. The Apaches are at war with the white man and Hondo is half Apache and serving as a scout for the US Army. He regretfully leaves the woman and finds his Company all killed by Apaches. He comes back to report and finds the woman's husband. The husband is scum of the worst kind and tries to shoot Hondo in the back. Of course, Hondo kills him first.

Meanwhile, the Apache chief is in a bit of a bind. He has sworn to wipe out all whites but he has had friendly relations with this woman's family for many years. In order to satisfy his honor and his tribe, he makes the boy his blood brother and gives him his headband to wear. This is the bit that I found interesting. Do you have a hostile enemy in your RPG campaign? Make them honorable. Have them make special exceptions to their plans of conquest or revenge. This makes the enemy interesting and able to dealt with in more ways than just combat.

Have you done this in your campaign? Tell me your stories!
Posted by Jonathan at 2/20/2018 09:54:00 AM No comments:
Email ThisBlogThis!Share to TwitterShare to FacebookShare to Pinterest
Newer Posts Older Posts Home
Subscribe to: Posts (Atom)