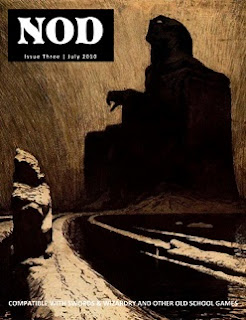 NOD #3 is 123 pages and starts with Beastmen of Nabu. You may recall that NOD #1 had an article on beastmen but that was a generic race for gnoles, orcs, ogres, hobgoblins, etc. This article is for specific beastmen that can be used as races or classes. There are very many of them in this article's 16 pages!
The next article is Gods of Nabu which covers Egyptian gods. This is the same format as Gods of Nod: Ophir in NOD #1 and describes 37 gods in 10 pages.
The Nabu Wastes is the feature article, a hexcrawl covering in 80 pages the eastern portion of the map in NOD #1. It is an Egypt-like land with dragon men, ant man, giraffe centaurs, along with the beastmen covered in the first article. There are also quite a few ancient tombs to explore.
Next is The Elementalist, a class that commands the elemental spirits to do their bidding. In effect, they can cast certain spells by performing a ritual and having an elemental spirit perform the spell. There are 12 new spells included.
Then there is The Druids of Nod, which gives us the druid class and 26 new spells.
Lastly, we get Phantastes, Part 2, which like in Part 1 found in NOD #2, we get some game notes. This one has notes on fairy food, Sir Percival, and the Alder maidens (tree spirits).
I enjoyed NOD Magazine #3. You can get the PDF of issue #3 at Lulu or in print at Lulu.
Posted by Jonathan at 1/09/2021 02:16:00 PM No comments:
Email ThisBlogThis!Share to TwitterShare to FacebookShare to Pinterest

I've made some major revisions to Kung Fu Classics. Please take a look and let me know what you think!