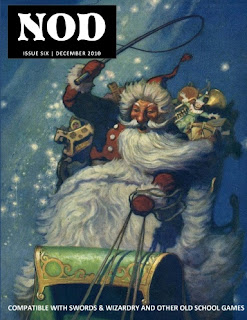 It's Christmas in April! Back in December 2010, I first started roleplaying with my daughter who was 9 years old. She was a fan of the Warriors series of books about wild cats and there was a free diceless RPG you could download and play. Pretty cool game and the GM role rotated so she got to play and GM. We wouldn't discover OSR games for almost five years after that.

Anyway, back to Nod #6. It's a big one - 133 pages! It starts off with Holiday Magic, two pages of  magical items associated with December holidays and also a spell (Chimney Charm) and a writeup of Saint Nick as a demigod.

We then get Gods of the Motherlands, eight pages of a pantheon "based on a mash-up of Greek and Roman myth with the medieval church." It's the standard Nod format for god descriptions except that most gods now have a holy day listed too.

The featured hexcrawl is next: Western Venetia. It is a mix of forests, hills, mountains, swamps, and sea coast with a little bit of everything for adventuring. It's 103 pages long and could keep a campaign running just by itself for a very long time.

Level 3 of Pleasure Palace of Izrigul is next. This level of the adventure started in Nod #4 and continued in Nod #5 is seven pages of a theater putting on a play for Izrigul complete with wandering emotion encounters. It looks very interesting and I would love to give this a try.

The Traveler is a strange class. They are traveling through the world in a dream state and must focus on an object to impose their will on this world. It's just two pages and it opens up so much weirdness for a campaign.

Finally, Phantastes, Part 5 is presented. Unfortunately, there are no RPG notes given.

You can get Nod #6 for free at https://landofnod.blog/nod/ or you can get it in print from Lulu at https://www.lulu.com/en/us/shop/john-stater/nod-6/paperback/product-1qzgen5v.html.

Posted by Jonathan at 4/21/2021 03:55:00 PM
Email ThisBlogThis!Share to TwitterShare to FacebookShare to Pinterest