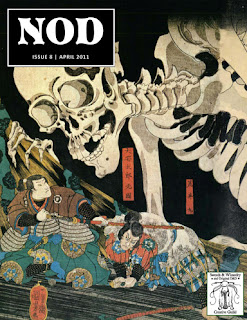 Nod #8 came out in April 2011 and details the region of Nod known as Mu-Pan, a land loosely based on Chinese and Japanese mythology.
It starts with a way to vary the fighter class to get some wuxia flavor. Just limit the benefit that armor can give you and take some special maneuvers. For example, if you limit the armor benefit to +8, you get only 1 special maneuver but if you limit the armor benefit to 0, you get 5 special maneuvers. There are 15 special maneuvers and range from deflecting missile attacks to mighty leaps to breaking objects in two. A nice, light touch to get some good flavor.
Next up is the wushen, which is a variant of the cleric class. It gets two special maneuvers, no limitations on weapons, a different spell list, and cannot wear armor. They are elemental priests and can cast fireballs and lightning bolts!
The bulk of the issue is taken up with describing Mu-Pan and its hexcrawl. Mu-Pan is the land of the dragons and was split into four kingdoms each led by dragons. Then the tiger people conquered them all and ruled for a while until they disappeared in the face of rebellion. Who knows what will happen now? More than 70 pages describe the different areas and the hexcrawl.
Then we get Monsters of Mu-Pan and Gods of Mu-Pan, all excellent additions. Interestingly, the gods are based off the stories of Lord Dunsany.
I enjoyed NOD #8 and want to read more. You can get the PDF of issue #8 at Lulu or in print at Lulu.
Posted by Jonathan at 5/04/2022 01:34:00 PM
Email ThisBlogThis!Share to TwitterShare to FacebookShare to Pinterest