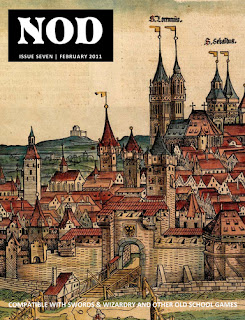 Nod #7 came out in February 2011 and begins with an article about Saint Valentinus and the Order of the Flowery Skull. It is a knightly order consisting of 12 knights (who are also bards) and also a grand master who all live in an abbey and are worshippers of St. Valentinus. The saint is given stats and a patron spell, Crown of Glory.
Next up is Antigoon, City of the Sun. It is located in Western Venatia (Nod #6) and has a Dutch republic theme with Germanic accents. The city is known for the arts and its scandalous aristocrats but they also have a sizable army and navy. A map with 51 locations is detailed.
We then get an article about fashion and how dressing well can give Charisma bonuses. Costs are given for many types of clothing and fabric too.
Blackpoort, City of Thieves is next and it is also located in Western Venatia (Nod #6). It is a dirty city covered in soot and filled with thieves and the like. A map with 60 locations is detailed.
We then come to Pendemonium Part I which detailes the fallen angels Abigor (Grand Duke of Hell) and Adramelech (High Chancellor and President of Hell).
The crown jewel of Western Venatia (Nod #6) is Lyonesse, the Gleaming City. It is known for knights, ladies, chivalry, and feudalism. A map with 70 locations are detailed.
After that is The Cyclopeans, a new race for Pars Fortuna. They can read faces and peer into the future and also go into a battle fury. A cyclopean redoubt of 18 locations is detailed.
Lastly, Phanastes VI appears but again, with no RPG notes given.
The cities are the main draw here but the other articles give some good flavor to spice up your campaign world. Speaking of which, I just ran my 2nd session of a new campaign that I am basing in Nod. The PCs are starting in Eastern Venatia (Nod #4) and will most likely head west after dealing with a local bandit problem in the Viscouty of Xaphrei.
As always, I enjoyed NOD #7 and can't wait to read more. You can get the PDF of issue #7 at Lulu or in print at Lulu.
Posted by Jonathan at 3/08/2022 09:14:00 AM No comments:
Email ThisBlogThis!Share to TwitterShare to FacebookShare to Pinterest
Newer Posts Older Posts Home
Subscribe to: Posts (Atom)