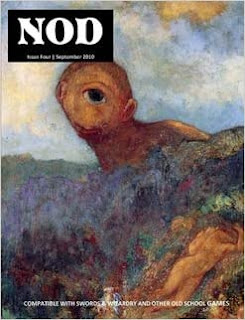 NOD #4 is 106 pages and is almost entirely the hexcrawl. It begins with the Medieval Bestiary which is 10 pages of strange creatures from European folklore. My favorite is the Panthera, which is a feline the size of a leopard that can create a cloud of perfume that acts as a charm spell.
Eastern Venatia is the feature article, a 75 page hexcrawl that also talks about the larger area that includes this hexcrawl and the ones in NOD #1-3.
The next two articles are adventures, more detail for two of the hexes detailed in Eastern Venatia. The first is The Pleasure Palace of Izrigul, a seven level dungeon that only has the first level detailed in this issue. The second is The Ruins of Timulus, which is a complete 8-page adventure for mid-level adventurers.
Next is Gods of the Golden Sea, which has the same format as the previous articles on gods. This one is based on the mythologies of the eastern Mediterranean.
Lastly, we get Phantastes, Part 3. The game notes talk about the nature of Fairyland and shadows.
NOD Magazine continues to be quality material. You can get the PDF of issue #4 at Lulu or in print at Lulu.
Posted by Jonathan at 2/13/2021 06:11:00 PM 2 comments:
Email ThisBlogThis!Share to TwitterShare to FacebookShare to Pinterest
Newer Posts Older Posts Home
Subscribe to: Posts (Atom)