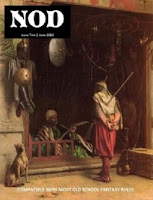 We start off Nod #2 with Cloak and Dagger, an article giving us a Thief and Assassin class. They're fine classes but there's nothing that really stands out with them.
Next, we get Urban Adventures which gives a lot of detail about urban areas. Mr. Stater recommends giving city-states alignments to use as a shorthand for the society. He then talks about population and how that corresponds to the number of manors, shires, burhs (markets), and abbeys in the area. He also recommends giving a theme (genre) and vista (sights, sounds, and smells) to each city-state. Then we get some pages about the citizens, the social classes, and notable citizens like alchemists, animal trainers, armorers, barbers, beggars, blacksmiths, bowyers, engineers, fences, guides, healers, herbalists, innkeepers, jewelers, lawyers, merchants, nobles, priests, prostitutes, rakes, sages, sailors, scribes, spies, students, tax collectors, torchbearers, and traders. Each get a paragraph and a 2-line statblock. Next, there is a bit about taxes, tolls, tithes, and money changing. Then there are civic organizations like colleges, companies, guilds, mercenary bands, thieves' dens, and universities. We also get a few paragraphs about manorial villages outside the city-state. Lastly, there are events and random urban encounters. It's a total of 12 pages long and quite useful.
Into The Wild follows and it is a 7 page article on travelling through the wilderness. It gives travel times, types of wilderness terrain one might encounter, natural dangers you might encounter, battle conditions, random encounters, and strongholds. Another article that is very useful.
After that is the article Barter & Trade, which gives tables of goods equivalent to 100gp, 1000gp, and 5000gp. Along with that is a merchant class, The Venturer, which can appraise, haggle, smuggle, lead, know languages, and sense danger. Good stuff!
The feature article of this issue is not a hexcrawl but detail on Ophir The Wicked, a city of corsairs located in the previous issue's hexcrawl. There's 23 pages on 61 buildings and their inhabitants. Since it is a city with black market and slave trade, Mr. Stater does state up front real slavery is real bad and this is but a pulp fiction version. Also, as a little joke, the slave auctioneer is a literal talking weasel.
Continuing to the next article, Sword Or Axe?, we get 4 pages on differentiating weapons from each other. Mr. Stater recommends giving axes more damage, bows more attacks (with a penalty to hit), crossbows more damage, daggers less damage but with a bonus to hit, flails with a bonus to disarm, javelins more damage, spears with a bonus to initiative and damage, and swords with a bonus to hit. In short, it gives a reason to choose one weapon over another. I think more could be done with this but it is a good start with slight touch.
Eureka! is an article about a scientist class who can make inventions. It's a very cool 3 pages that talks about research costs for formulas and inventions and gives a page of sample inventions. These inventions are costed by comparing them to a spell so are not strictly scientific. Sounds fun to me!
Next is Books & Scrolls which is 2 pages about the forms books came in (e.g. clay tablets, bamboo scrolls) and even what material the paper is made out of (parchment, vellum) and even the kinds of reading material.
The next 14 pages are devoted to printing the first part of George Macdonald's Phantastes, a novel about a young man entering the world of faerie. Mr. Stater does add gaming notes to the story and talks about Fairy Sight, Fairy Blood, Flower Fairies, Goblin-Fairies, The Ash, and The Beech (the latter two are trees).
Ships & The Sea is next. It's 6 pages on different sizes of ships, stats for those ships, enhancements for ships, and ship to ship combat (including the effect of spells). Very useful if you campaign at sea.
The Elan is another class, psychic knights based on E. E. Smith's Lensmen series, which I have not yet read. You must first be a Psychic class (from issue #1) and then when reaching level 4, can become an Elan. Elan retain their psychic powers and also get mindblades that get stronger as they level up.
Then there is Candle Magic where we get 2 pages of many candles and the different magic they produce. These are made by those Wise Women and Cunning Men from issue #1. Good stuff!
Finally, we have Pars Fortuna. This is not the complete game that Mr. Stater wrote but a preview of it which generated three race-classes. They are alien and weird and fit perfectly into a fantasy world.
I enjoyed NOD Magazine #2 and can't wait to read issue #3. You can get the PDF of issue #2 at Lulu or in print at Lulu.
Posted by Jonathan at 12/30/2020 04:26:00 PM No comments:
Email ThisBlogThis!Share to TwitterShare to FacebookShare to Pinterest
Labels: NOD 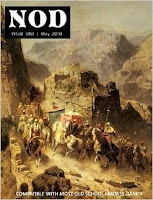 NOD #1 came out in May 2010 and is 85 pages long. Mr. Stater starts (after the Table of Contents) with Welcome to NOD! where he gives some of his campaign design philosophy: only make what matters in game and also make a wide world of many cultures to explore. NOD Magazine is going to show us what he means.

The first article is one page about coins, how much they weigh, how much a character can carry, and how much they're worth. It gives us a good baseline for the loot that will be shown later.

Next, we have Fighting-Men of Nod, which details six classes: the fighting-msn, the barbarian, the bard, the monk (or swashbuckler if a monk does not fit in your campaign), the paladin, and the ranger. Each of thee classes get some special abilities at 1st level, and a few more as they progress in levels. All look fun, well made, and the abilities are light touches suitable for an OSR game.

Speaking of abilities for OSR games, the ensuing article Boons & Benefactions is all about abilities that characters can choose at 3rd, 6th, 9th, and 12th level. There are 43 of them and and a great way to do feats in an OSR style.

Then we get the biggest article, The Wyvern Coast. It is a sandbox complete with a two-page hex map and hex descriptions. We get a description of the area: the grasslands, the sea, and the coast, along with encounter tables and creatures. This article is 60 pages long and is a sizable adventure area just by itself. I don't want to say too much about it so as not to give spoilers but it is very imaginative and looks very fun. The black & white map is hard to read, however, and I suggesting getting the color maps Mr. Stater provides at https://landofnod.blog/nod/.

The article after is Wise Women & Cunning Men which is about adepts, practical spellcasters of rural folk. They are magically less powerful than clerics or magic-users but they have another skill that serves their community. (Pick one of alchemist, animal trainer, armorer, berserker, guide, healer, or sage.)

Next are Gods of Nod: Ophir which details the gods of the Wyvern Coast, based on the gods of the ancient Phoenicians. I like these god descriptions as stats are not given but instead we get the god's name, other names it is known by, who worships the god, what weapons the god uses, what are the god's minions, symbols of the god, alignment of the god, and what the god grants its priests (which is a unique spell detailed in this article). It is a great way to do gods.

After that is Random Villages which is a couple pages of random tables to create a village. An example village rolled on these tables is given: 200 cowardly shellfish fishermen that live in brick huts protected by a thicket getting their water from a cistern ruled by a council of elders have a den of assassins or highwaymen, and are famous for their dark secrets.

Denizens of the Dark Continent gives stats for some legendary creatures of African folklore. I especially like the Abatwa.

Beastmen, Centaurs & Mechanical Men is next and it details 3 "races" to put in to differentiate your campaign from the "traditional" fantasy campaign.

The last article is Your Mind Will Bend, detailing a Psychic class. there are twenty psychic powers to choose from and a psychic gets one at 1st, 3rd, 5th, 7th, 9th, and 11th levels. To use a psychic power, you must succeed at a saving throw and the target must fail at their saving throw. Looks very interesting yet still simple, which is a hallmark of Mr. Stater's.

I very much enjoyed NOD Magazine #1 and look forward to reading more! You can get the PDF for NOD #1 for free at https://landofnod.blog/nod/ or you can get it in print from Lulu at https://www.lulu.com/shop/john-stater/nod-1/paperback/product-11387029.html.